We’re halfway through Missy’s Meatball Project, so it seemed appropriate to make the first meatballs I ever remember cooking: Aunt Barb Meatballs.

These are inspired by a comforting meal my Aunt used to make me when I came to her house for the weekend (which would happen anytime I needed a break from college or was helping out with babysitting; they were my closest relatives to school). The actual meatballs aren’t really the same (I’m actually not sure whether my Aunt made hers from scratch or used premade ones), but the simple gravy is. Cream of mushroom soup is one of those ingredients that the “foodie” crowd disparages (and it certainly isn’t the healthiest thing in the world). This bothered me briefly at some point in my cooking life, but eventually I stopped caring (especially after experimenting with homemade versions without much success). Between my 80s Midwestern upbringing and the fact that it’s a key component of John’s favorite childhood meal, it’s destined to have a place in our pantry.

This recipe hasn’t really changed much since I first started making it, though now I wet the breadcrumbs with milk, etc. I made sure to measure the components when making it this time for the project, though, in order to update the recipe from (gulp) eight years ago (meanwhile, I still forgot the egg, so eight years later, I’m still spazzy in the kitchen). This recipe site is getting old, man. I like to serve this with either egg noodles or quinoa. Still, they’re never quite as satisfying as they were when Aunt Barb greeted me with them after Uncle Bob picked me up from the train station.

END_OF_DOCUMENT_TOKEN_TO_BE_REPLACED

This was just a clean-out-the-fridge salad that came together well. I had a leftover chicken palliard and some leftover peppercorn dressing that I paired with what I had in the fridge. Radishes, butter lettuce, and avocado give it a summery touch, while bacon and avocado add much-needed fat.

END_OF_DOCUMENT_TOKEN_TO_BE_REPLACED

Smoothies have become a big part of my breakfast routine again now that I prep a week’s worth ahead of time in the fridge (I use a 1 quart Chinese food plastic container and just throw the contents of the whole thing into the blender with some ice). When I’m starting the day with 2-3 fruit/vegetable servings under my belt, I feel a bit more like a healthy-ish human, even if that’s debatable.

Here are two I’ve been making recently – one is brand new, the other is sort of a best-of-both-worlds recipe from previous smoothies I’ve made. These are especially good for me on weekends when I’m running out the door straight to the gym or yoga. 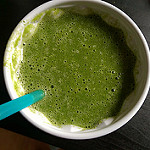 END_OF_DOCUMENT_TOKEN_TO_BE_REPLACED

I threw this together as a clean-out-the-fridge meal and couldn’t believe how good it was. Not crazy different from my traditional stuffed peppers, but just unique enough to keep things interesting. This is more of a guide than a recipe since I wasn’t measuring when I threw this together.

END_OF_DOCUMENT_TOKEN_TO_BE_REPLACED

I vaguely followed this recipe (more the technique than anything else) for this side, which I served with a basic panzanella (one recipe here but I just improvised), and a simple sirloin steak that we split, with charred pepper sauce.

END_OF_DOCUMENT_TOKEN_TO_BE_REPLACED

This was good and easy. Would make it again, particularly if I had leftover quinoa hanging around.

END_OF_DOCUMENT_TOKEN_TO_BE_REPLACED

These were pretty cool. Light, tasty. The spicy mayo really makes it. I feel like I could use a bit more avocado/cucumber/shrimp to fill them out, but they still work fine. Spraying the cups with cooking spray and packing everything in tightly helps with shaping. 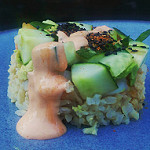