A note that brown gravy meatballs over spaghetti squash (roasted this way) was probably our favorite recipe using spaghetti squash that I’ve made. We had these with Pati’s green beans (recipe to follow).

Why yes, I do still make new meatball recipes. I thought these would have a bit more flavor, but my friends liked them well enough, and it’s an interesting recipe.

END_OF_DOCUMENT_TOKEN_TO_BE_REPLACED

One year and 53 meatball recipes later, Missy’s Meatball Project is finished! Here’s a look at how it all went down. 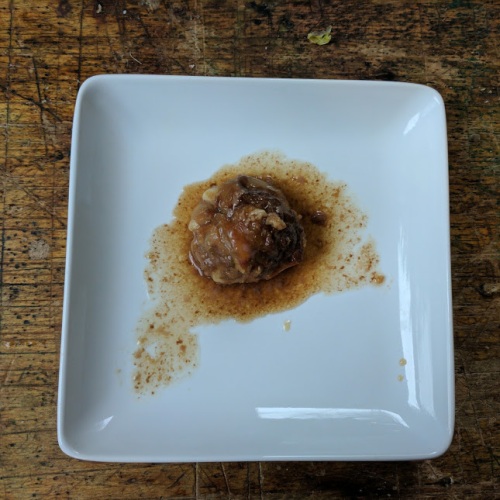 Random Statistics: *My most-used base, which kind of surprised me: chicken (13 recipes). Nine recipes were combinations of multiple meats. Meanwhile, both pork and beef meatballs had seven recipes each.

*A rundown of all the proteins I tried during the project: Beef, Chicken, Turkey, Pork, Shrimp, Crab, Venison, Veal, Bison, Lentil/Veggie, and Lamb (with some variations like chicken sausage, chorizo and turkey breast), plus meat and meat/vegetable combos.

*A couple of examples of technique variety: I had two grilled meatballs, four soups, and just one sandwich. Only one meatball was meatless. Baked meatballs were common, but pan-friend meatballs weren’t rare; others were simmered. I used my pressure cooker for a couple, too (these were the most successful in that realm)

*International influences: A whopping dozen meatballs had Italian influences, but those went beyond typical red sauce meatballs (though there were a few of those) — I’m including everything from piccatta meatballs to marsala meatballs under this heading. I thought Asian meatballs would have been the largest category, to be honest, since I just tend to constantly cook Asian food, and it was close: 11 varieties were Asian.

*Sources: I was surprised to discover nearly half my meatballs (23) were recipes I came up with myself (usually translating a dish I already make into a meatball). Five were from family and friends, and these outside sources were repeated more than once: Cooking Light (3), America’s Test Kitchen (2), Smitten Kitchen (2), and Serious Eats (2).

*Missed opportunities: I really wanted to make an Indian meatball and never got around to it. John wanted me to do falafel-balls as our vegetarian meatball, and that one also went by the wayside. A friend suggested Deep Fried Meatballs, which sounded fun but I’m pretty lazy about deep frying at home. And I kind of wanted to try out goat as a meatball protein, too. Weirdly, I didn’t do a Greek meatball, even though I tend to make Smitten Kitchen’s lamb ones pretty regularly at home.

French Onion Soup Balls, a la Missy. These are fresh in my mind, but were a really good combination of creative and satisfying. Takeaway: you won’t go wrong adding caramelized onions to your meatballs.

Matzoh Ball Meatballs, Serious Eats. One of the most complicated recipes I made that still turned out delicious. Restaurant (or at least deli) quality.

Marsala Meatballs, a la Missy. Both these and my almost-as-good Dijon meatballs stood out as classic-dish-to-meatball adaptations I’d make again on any random weeknight.

Becky’s Family Meatballs, Becky’s parents’ recipes (tied). I had particular fun with these because I was making them with a friend and learning her old family recipes. But beyond that, both recipes are legitimately terrific – the technique for the Italian ones is sound, and those Danish ones are just addictive.

Meatballs Parmesan, Smitten Kitchen. These are what I picture when I am looking for a cheesy meatball fix.

Veal Picatta meatballs, a la Missy.  I think I just really like veal meatballs in general, and am also partial to the particular flavors here, but still a winner.

Breakfast balls, a la Missy. Sort of an unexpected victory, and these were also very simple.

Lion’s Head Meatballs: , from Serious Eats. Maybe the most unique meatball in terms of composition (pork + pork belly + tofu + water chestnuts?) while still being really tasty (and quite filling).

Jack Daniels Meatballs: It didn’t help that I messed up the original meatballs here, but the sauce was just too sweet.

Chicken Meatballs Paprikash: Recipe isn’t there yet. Sauce was a little thin and the flavors seemed undeveloped.

Alton’s Swedish Meatballs: We didn’t hate these or anything when we had them, so this might be revisionist history, but I really remember not being impressed with the sauce, and we found several other better brown gravy and or/Eastern European-influenced ones, from Jen’s to the aforementioned Danish and Salisbury Steak ones, during the project.

Why meatballs? No deep thoughts here. I like meatballs! So does John! I noticed I was making them a lot when cooking at home, and that I enjoyed inventing and adapting meatball recipes, so it just popped into my head as a fun project when trying to think of a cooking goal for 2016. Plus, they’re super versatile and can be adapted to just about any cuisine, which was appealing. And hey’re relatively friendly to the waistline if you watch your portion size and don’t consider pasta as an automatic accompaniment.

What’s the end game? Are you writing a cookbook/article about meatballs? Nah. Though food and writing are both a big part of my day job, cooking is something I do for fun, and for myself and my friends and family. Almost every year over the past decade or so has involved either a set of kitchen goals for me (say, “make gougeres” or “break in my tagine”) or a major cooking project (think “Mostly Meatless March” or “Cook At Least One Recipe Out Of Every Cookbook I Own”). Doing more with it than that just felt like work (additionally, I’m not a great food photographer). We toyed with building a website for it, but never really got around to it.

Are you a meatball master now? Eh? I make a decent meatball, but let’s not get crazy. I definitely am getting better at creating my own meatball recipes, and I can easily make a basic meatball without needing a recipe at this point. But I wouldn’t categorize my meatballs as the Greatest in the Land, and I still find ways to mess them up rather regularly. I’d categorize myself as someone who makes good, and occasionally great, meatballs overall.

What did you learn about meatball technique? The refrigerator is your friend for retaining shape, either by chilling the mixed filling or chilling the formed meatballs themselves. I tend to prefer meatballs that use some sort of panade (softened bread or even dry breadcrumbs, usually using milk), and I found that I’m not particularly fond of all-beef meatballs, which I tend to find rather greasy. Stovetop browning isn’t always necessary. I thought cornstarch was an interesting addition to many of the Asian meatballs I tried, though I can see the springy texture that it creates not appealing to everyone. Ground poultry meatballs can be terrific, and shouldn’t be undersold, but I recommend incorporating some dark meat. There are some interesting and effective meatball moisteners out there, from tofu to ricotta to olive oil. Don’t get too free-wheeling with ingredients like fish sauce and anchovy paste in meatballs  — use strong flavors in moderation.

Did you get sick of meatballs? Surprisingly, no, and neither did my husband. I did sometimes get annoyed with the thought that I HAD to make a meatball that week to stay on pace, just from a meal-planning perspective, but we always found ourselves in the mood to try them once they were on the table. I’m sure I’ll keep making new and old meatball recipes in 2017, though I doubt it will be a weekly event. Though today’s the first day of 2017, and what’s on the menu? Baked turkey meatballs (but this is mostly because it’s a New Year’s Day traditional meal for us).

Reader request meatball! I promised those following the project I’d do at least one people’s choice meatball, and liked this idea from my friend Jamie. I made this recipe from Serious Eats, which was quite good. The meatballs are big (and rather caloric with the pork belly) but the dish itself is pretty filling.

END_OF_DOCUMENT_TOKEN_TO_BE_REPLACED

Managed to get a vegetarian meatball into the mix. These were lentil and vegetable based. I found them slightly dry, but my friends seemed to like them. Served with a walnut and spinach pesto. 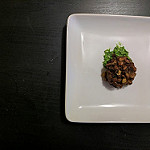 END_OF_DOCUMENT_TOKEN_TO_BE_REPLACED

The final meatballs are here! I made a triple batch (!) of these for our holiday potluck, along with vegetarian meatballs (recipe to come) for our vegetarian friend. They were epic and huge as promised.

END_OF_DOCUMENT_TOKEN_TO_BE_REPLACED

Meatball #50 was definitely one of our favorites. And it was a made-up one, too. A note that I meant to include some thyme or rosemary in these, but forgot, and they still turned out absolutely delicious.